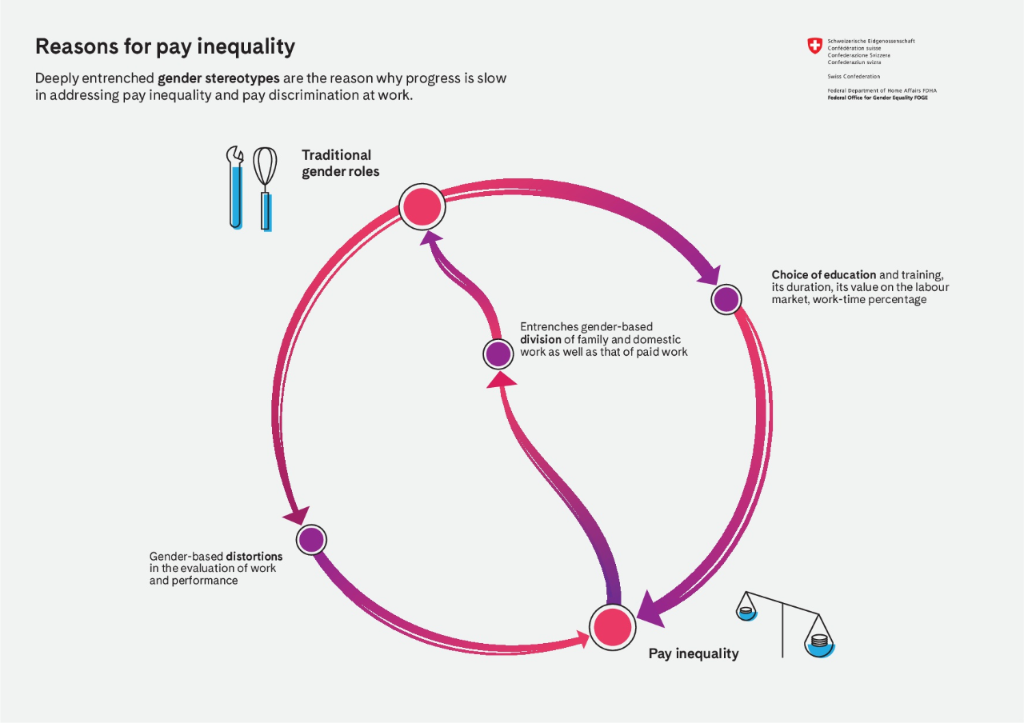 There are many reasons for pay gaps between women and men. Sometimes these reasons are historical but can also be due to deeply ingrained stereotypes. The lack of childcare and the uneven sharing of unpaid care duties also play their part.

Inequalities before entering the labour market

Inequalities before entering the labour market

Nowadays women are more likely to work and have largely caught up with their male counterparts in terms of education and professional experience. Nevertheless, there are still differences between the sexes regarding education and professional experience. Career and study choices continue to be strongly gender oriented. There is a close relationship between the distribution of roles prevalent in many families and the differences before entering the labour market. Mothers in particular have less professional experience as many take a career break or reduce their working hours to take on domestic and care duties. Fathers, in contrast, are less likely to work part-time and those that do tend to be overlooked when it comes to promotion. In addition, childcare is often lacking.

Inequalities once on the labour market

Inequalities once on the labour market

Inequality is reflected in the differing pay and job prospects for men and women. Often the level of pay in typically male occupations or fields is higher compared with typically female occupations. Women are less likely to work in more demanding and senior positions, have less company-specific experience and differ from men in the number of hours they work.

Discrimination on the labour market

If, within a company, women with the same qualifications have less chance of being hired, fewer continuing education opportunities and less chance of being promoted and given more demanding tasks, they are victims of employment discrimination. If they receive unequal pay for equal work or work of equal value, they are victims of pay discrimination. A distinction is made between direct and indirect discrimination. Direct pay discrimination describes a situation where, for example, different minimum wages apply to male and female unskilled workers. A situation where more women than men work part-time, and part-time workers are paid lower wages, is known as indirect discrimination. The same holds true if a typically female occupation (nurse) is less well paid than an equivalent typically male occupation (police officer).

Pay discrimination is not usually deliberate. The reasons can often be found in the different values attributed to men's and women's work and performance. These differences cannot be justified objectively and are coloured by gender stereotypes. Discrimination can also occur when pay is not established on a systematic and transparent basis and especially when it is negotiated on an individual basis. Companies can effectively reduce the risk of hidden pay discrimination by undertaking regular reviews of their pay practice and by avoiding gender bias in job evaluation, when establishing the pay of functions and evaluating performance.

Specific reasons for pay discrimination within a company

Specific reasons for pay discrimination within a company

Pay discrimination disadvantages women and their families in the short and long term, as lower pay has an effect on social insurances and pensions. But it also has consequences on society as a whole. The State has to pay more social benefits and at the same time is denied tax revenue and social insurance contributions. The economy has a smaller pool of qualified skilled workers as women are not sufficiently present in the labour market. Lastly, pay discrimination distorts competition between companies.